Congratulations to Alan Thatcher, founder of World Squash Day, on another very successful global Squash Day event on October 20. It was great to see the international community of squash lovers come together in a united effort to raise awareness of squash and heighten the support of our Olympic bid on this special day.

World Squash Day is a positive and impactful occasion, and we are proud that many member clubs in the United States participated in making it as successful as it was. While the US only has 4% of the court capacity globally, a notable 5% of the clubs that participated were from America, showing our nation’s commitment and love of the sport.

Along with numerous articles about the Olympic bid and World Squash Day on our websites and within emails sent to our members – in September, U.S. SQUASH ran an article (left) about World Squash Day at the front of our official publication, Squash Magazine, which is sent to all members across the country and available in squash clubs across the nation.

World Squash Day is one part of a broad array of activity that U.S. SQUASH has been heavily involved with in terms of funding, promoting and driving the Olympic pursuit of squash globally. 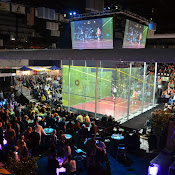 “The leadership of U.S. SQUASH has been directly and deeply engaged over the last few months in working closely with the World Squash Federation and some of the most important executives in the Olympic movement regarding squash’s pending bid. In particular U.S. Squash has raised a significant share of the funding for our talented bid consultant who is responsible for the overall campaign, including producing the necessary media material including the all-important bid film that will be utilized for the upcoming presentations to the IOC,” says Peter Lasusa, Board Chair of U.S. SQUASH.

The U.S. SQUASH Annual Assembly was recently held, open to all members and constituents of U.S. SQUASH, at which Mike Lee OBE, the Olympic bid consultant, was enlisted to make the keynote presentation to our members about the Olympic bid and activities to promote squash including World Squash Day, to raise a broader awareness and understanding of the campaign within the US. That keynote presentation was also live streamed to all U.S. SQUASH members and the community at large online.

“We are very grateful that U.S. SQUASH invited Mike Lee across during their Annual Assembly to help raise interest in the Olympic bid to all constituents within the United States. We are also very pleased with the written support in email blasts and articles that U.S. SQUASH has provided throughout the campaign,” says Andrew Shelley, Chief Executive of the World Squash Federation.

U.S. SQUASH has just wrapped up the 2012 Delaware Investments U.S. Open, which brought international attention to the game of squash and produced extensive local, national and global media coverage of our top professional players and their Olympic aspirations in the lead up to World Squash Day.

During the U.S. Open, a video was produced highlighting the world’s top players (left) and encouraging viewers to ‘Back the Bid’, both within the video and in the accompanying text. That video was sent out to the entire U.S. SQUASH membership and other stakeholders a few days before World Squash Day with an article explicitly encouraging members to contact their clubs to participate in World Squash Day, and has also already travelled extensively around the world via social media.

The U.S. Open was an excellent way of highlighting why squash deserves to be in the Olympics. Leading up to and during the U.S. Open, the promotion of squash’s Olympic bid was a heavy focus – an article about the Olympic bid (right) was published in the official event program, extensive Back the Bid branding and signage was displayed, regular membership emails and website updates were produced and distributed to our entire national membership profiling the Olympic bid, content was provided on the U.S. Open web app, and social media posts.

We will continue to support the Olympic bid over the coming months in the lead up to the IOC’s decision. It is clear that this campaign has brought out the best in our national and international community, who have banded together in support of the Olympic pursuit, and we look with optimism to the outcome.