The second day’s play on the glass court at Drexel saw no repeat of Chris Gordon’s historic upset of yesterday, as all the seeded players went through to complete the second round draw…but no shortage of drama either. 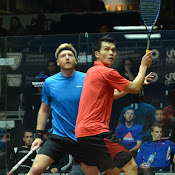 The day started with a solid performance from England’s Tom Richards with Malaysia’s Ong Beng Hee generally second best for the first two games. Ong recovered an early deficit to take the third but Richards reasserted in the fourth, taking advantage of his six-year age advantage as Ong seemed to tire.

“All credit to him, he changed his game completely in the third,” said Richards, “I hung in and nearly snuck the game, but I knew I had to straighten up and make it physically tough again in the fourth. 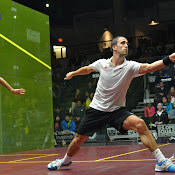 It will be compatriot Peter Barker next for Richards, after the sixth seed comprehensively beat Shahier Razik 11-4, 11-6, 11-1. The Canadian, who successfully came through qualifying to contest his 9th U.S. Open, could never seriously trouble the English left-hander, who reached the quarter-finals last year and wants more.

“It will be a tough match against Tom, but hopefully I can hold off the youngsters for another year or two,” said Barker.

After an out of sorts start that saw hit the tin eight times in the first game, Tarek Momen, the recent Malaysian Open champion, recovered to overcome Switzerland’s Nicolas Mueller in five games. 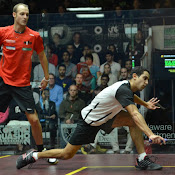 “It feels great that I got through, but I was disappointed in how difficult I made it for myself in the first and third games. I didn’t play badly in the third, just a lapse of concentration at the end, so I knew I could turn it round and I’m happy I did.”

In the final match of the afternoon session Ramy Ashour beat Saurav Ghosal in straight games, but none of the three were easy. The Egyptian, seeded four, displayed all his usual attacking skills and speed around court, but Ghosal’s own speed and suppleness allowed him to chase down many of the shots that Ramy usually wins the point off. 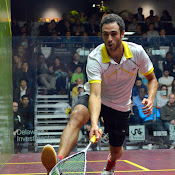 Ghosal thought he had won the second only to be called back onto court for a let, and Ashour took the next three points to double his advantage. The end of a close third game saw Saurav disappointed again by a couple of decisions as Ashour finished the match 11-7, 13-11, 11-9.

“He’s very quick,” admitted Ashour, “I had to push myself all the time, he could have taken any of those games. I’m happy with how I played but I’ll have to push myself harder in the rest of the tournament.

After an on court session for a number of schoolchildren from Philadelphia’s SquashSmarts programme, second seed and last year’s runner-up Nick Matthew took to the court against Egypt’s Omar Mosaad.

The physically imposing Mosaad kept his more illustrious opponent at bay in the first game, with Matthew struggling to come to terms. After dropping a few points behind in the second the Englishman gradually worked his way back into the match, which featured numerous collisions, decisions, warnings and stoppages.

“It’s tough to play Omar,” said Matthew afterwards, “I like to play a fluid game but we always seem to have a lot of stoppages and lets. It wasn’t a lot of fun but I’m pleased to be through to the next round.”

The referees were involved 28 times in that match, and there was no respite for them as they were called on to adjudicate 46 times in the next one as Adrian Grant further boosted the English contingent in the last sixteen with a hard-fought five game win over young Egyptian qualifier Karim Abdel Gawad, winning out in a tense finish 11-9, 8-11, 11-1, 5-11, 11-9 in 88 minutes, the longest match of the day.

“I don’t plan to have five-setters,” said a relieved Englishman, “but I suppose I have a lot of experience at them which stands me in good stead! I was playing well enough, I had leads in all the games except the fourth, I just need to be able to finish them off better, not slow down near the line like Usain Bolt!”

The penultimate match of the day was a much-anticipated one between defending champion Amr Shabana and Colombian qualifier Miguel Angel Rodriguez. Shabana is looking lean and fit, but the speedy and unorthodox South American is a handful for anyone, and so it proved in the first game as Rodriguez went 9/4 up.

But Shabana isn’t a four-time world champion for nothing, and he seemed to work out what he needed to do and started doing it very efficiently. There were some flashing winners, some scrambling retrievals and a good number of very long rallies which kept the crowd entertained throughout.

Despite a trio of successful appeals to the video ref by Rodriguez near the end of the match, Shabana had the last laugh though as he closed it out 11-9, 11-6, 15-13.

Last up were Dutchman Laurens Jan Anjema, who had such a good run here last year in reaching the semi-finals, against Pakistani qualifier Aamir Atlas Khan, who put out the USA’s Julian Illingworth in a marathon qualifying match. Although Khan improved game by game Anjema proved too strong as he claimed the final last sixteen spot, and a match with Shabana, 11-5, 11-7, 11-9.

So tomorrow’s second round will see all eight seeds in action, six Englishman, five Egyptians, but probably more importantly, one American too. Whatever you do, don’t miss it …

Men’s Round One (bottom half):